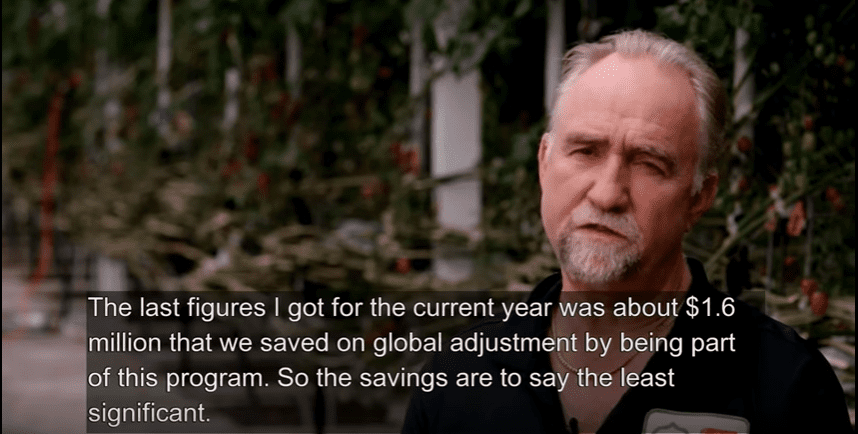 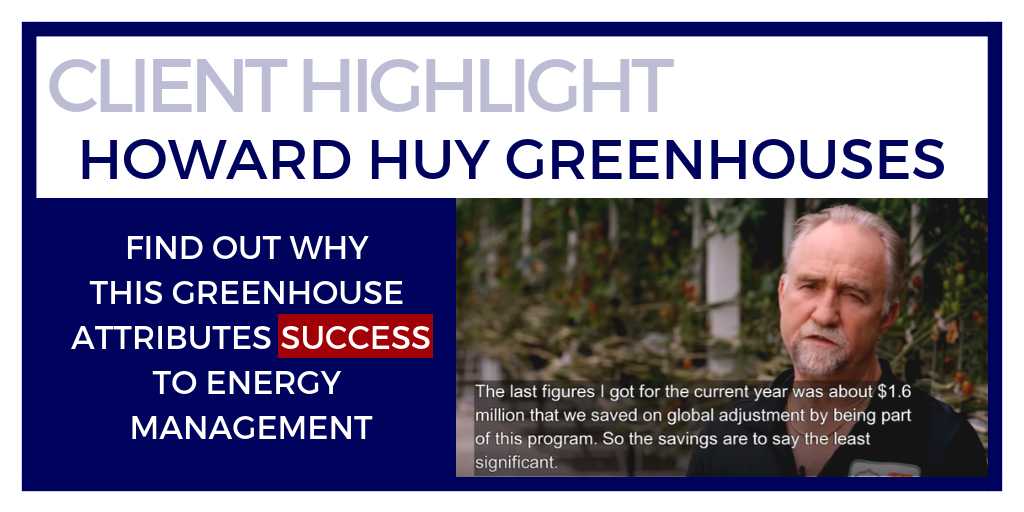 In 2015 Howard Huy faced a stark choice. Years earlier, he had installed lights in his greenhouse for higher production of his specialty cucumber crops. It was a major investment that allowed him to expand and grow for the long term sustainability of his family business. But by 2015, rising electricity prices were undermining his plans. He could no longer afford to light his crops. His choice, if he wanted to stay in the greenhouse business, was to abandon his long term strategy and write off his substantial lighting investment.

Howard Huy can’t recall the day he was introduced to David Arkell and 360 Energy. But it was a fortuitous encounter. After assessing the situation, 360 Energy knew Howard Huy Greenhouses qualified for a different electricity rate under Ontario’s Industrial Conservation Initiative (ICI). The impact of going to a different rate class was dramatic. “In the one month of January, before the change was made, I paid almost as much for electricity as I did for the rest of the year,” Mr. Huy said.

Howard Huy Greenhouses has been able to make substantial energy cost savings and maintain them ever since. As a result, his business strategy has been validated and his company has gone from strength to strength. Their cucumbers are even being exported into the United States. It’s a business success story with an international dimension.

Mr. Huy says the biggest benefit of their energy management approach has been the cost savings. Energy is a significant expense for his company as well as the greenhouse industry generally. “Information is power”, he says. “Energy can cost you a lot if you miss out. You need to be able to act immediately at times.”

Mr. Huy believes gaining energy market knowledge has given his company a big edge. He is able to take corrective action when it’s needed, a capability he did not have in the past.

What has been the most difficult challenge in implementing energy management? “It’s getting the proper information,” he says. “The energy market can be convoluted and obtuse. Everyone doesn’t give the same message or information.” 360 Energy helped the company make sense of the conflicting information they were receiving. “David’s team breaks it down and makes it concise and understandable. We didn’t have the time to sort it out by ourselves. When 360 Energy did it, we were able to make progress,” Mr. Huy added.

What does Howard Huy see on the horizon? He is concerned about what might happen with energy policy in Ontario now that a new government has been elected. He is nervous that they might make changes that could add volatility into the market. “You can’t have a 10 year energy plan in Ontario. Things change so much,” Mr. Huy said. It’s another reason why he is glad to be working with 360 Energy. 360 Energy helps his company stay current with what is going on.

Does Howard Huy have any advice for other business owners that are not in the greenhouse industry? “For any business with high energy use, make sure you are looking after your energy costs. Like any business owner, you have to wear a lot of hats. Sometimes it makes more sense to hire a professional to wear the hat for you. When it comes to managing energy, 360 Energy has been an excellent fit.” Mr. Huy concluded.