The Journey to Energy Excellence

Understandably, the traditional focus for most Alberta municipalities has been on energy production. With some of the largest oil reserves in the world, energy provides over 22% of Alberta’s GDP. However, a new generation of innovative municipal leaders recognizes energy consumption must get equal attention. They understand how a comprehensive, balanced approach unlocks additional economic, environmental and social value for their residents and taxpayers.

An excellent example of this emerging trend toward wise energy stewardship is provided by the Alberta Urban Municipalities Association (AUMA).

AUMA Leadership is Showing the Way

The 2013 AUMA Convention passed Resolution 2013.A2: “Municipal Energy Efficiency, Sustainability and the Canadian Energy Strategy”. The resolution recognizes wise energy use must become a high priority for municipalities. Like the Energy Excellence program, the resolution understands the critical role leadership plays in achieving consumption and energy efficiency goals. Alberta needs this municipal energy stewardship if it is to achieve its economic, environmental and social aspirations.

The AUMA is not alone in promoting this direction. The AUMA energy policy is reinforced by statements from the Alberta government. Alberta Energy also recognizes the important role for energy stewardship in a comprehensive energy strategy.

In both Alberta and Saskatchewan, municipal energy consumption per capita is significantly higher than other provinces. In part, this is due to weather. It is also a result of lower energy efficiency. Significantly, both provinces also show a trend in increasing use.

From the available information, it is clear that the majority of municipal energy use is for ‘thermal’ fuels. Electricity accounts for only about 22% of the total. Interestingly, electricity use per capita is similar across the provinces.

However, Canadians lead the world in electricity use per capita – which suggests there is significant room for improvement.

A review of total energy use per capita still shows Canada as the most intense of the industrialised countries. It is not possible to comment in detail on the municipal picture as there is a lack of extensive data on municipal energy use/spend. Only a small minority of municipalities report publicly on energy use/spend. As well, the Alberta Government has placed limited data in the public domain. 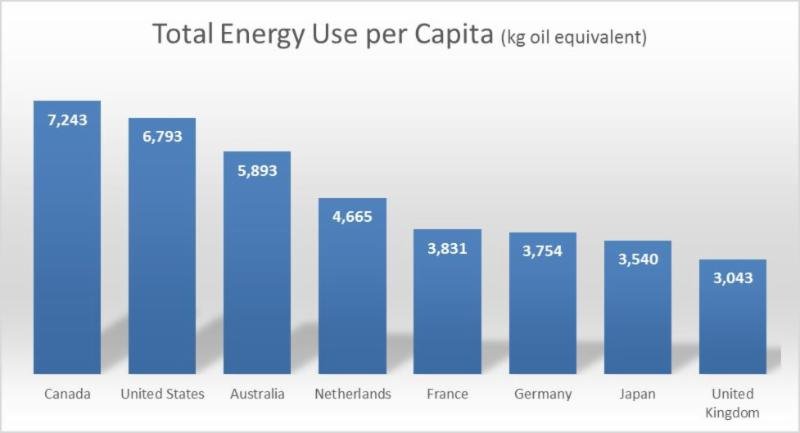 Energy USE is a significant issue both for Alberta and Canada. For municipalities in Alberta, reduced energy use equates to lower costs and reduced carbon dioxide emissions. Research suggests that annual cost savings between 10 and 25% are possible. Reduced energy use also supports the Alberta economy by ‘freeing up’ more energy for export.

The Alberta government, AUMA and its members understand that there is real value, at many levels, in being good stewards of managing energy. How do municipalities realize these benefits? By giving a rigorous focus to the managing of energy (both procurement & use).

Renewable Energy is Attractive to Municipalities

Alberta has some of the highest carbon content electricity in Canada. One-quarter of Alberta’s GHG emissions are a result of electricity generation. Currently around three-quarters of the electricity generated in Alberta is coal-fired. Many municipalities want to de-carbonize their electricity supply by promoting or procuring renewable technologies. (In this context, renewable energy includes solar, wind, hydro, combined heat and power production, and heat pumps.) Renewable energy clearly has an important role to play. But in general, a municipality should only consider procuring renewable energy after they have first minimised their energy use. The cleanest kWh of electricity is the one that is not used. The Pembina Institute estimates that the cost of a MWh reduced by energy efficiency is about a third of that from wind power (Greening the Grid Fact sheet, Pembina Institute http://www.pembina.org/re/greening-the-grid-in-alberta)

It is essential municipalities optimise energy use first, as this reduces the capital cost of the renewable energy generation. For example, changes in heat and power balance can impact the type of Combined Heat & Power (CHP) plant required. Critically, this synergy in deploying renewable technology at a site level can only be achieved within an integrated approach to energy management.

The Energy Excellence vision first addresses energy procurement to get the best value. It next reduces energy waste and improves energy efficiency to minimize energy use. Finally, it deploys renewable technologies to maximize the contribution to carbon emissions reduction.

For more than a decade, 360 Energy Ltd. has been helping municipalities achieve cost savings, improved environmental performance and citizen recognition through the Energy Excellence program.

360 Energy’s experience is that the journey from vision to delivered results is achievable, but requires a sustained and integrated approach. An implementation horizon of three to five years is usually required in order to balance what can be realistically achieved with the support resources required.

360 Energy has developed a structured, integrated and sustained approach. Based on real world, practical results, the journey to Energy Excellence program has been successfully deployed by a significant number of municipalities and other organizations.

The 360 Journey to Energy Excellence is Not:

The 360 Journey to Energy Excellence Is:

Energy Excellence is delivered through a customized mentoring and support program provided by 360 Energy. Employee engagement is critical. It differentiates Energy Excellence from other programs which fail as they are either:

a) delivered entirely by people outside the organization; or

b) rely totally on a very small number of people within the organization.

The Energy Excellence approach has been developed in Canada for Canadian municipalities. Yet it also draws on best practices from around the world. The Energy Excellence program is constantly refined in a process of continuous improvement as we learn from the experience of each client.

Energy Excellence has been deployed by a number of municipalities in Canada and proven to deliver long term positive results.

To learn what 360 Energy has done for municipalities and other organizations, view some of our video case studies.

To learn how your municipality can join the Journey to Energy Excellence with 360 Energy, we will provide you with a no cost interview and consultation. If you are interested, please contact us: