The blistering hot weather this summer has brought more than sweltering temperatures: electricity markets have heated up, as well. Here’s how it has played out in four markets:

Alberta set a new electricity consumption record in August as temperatures hit all-time highs in Calgary and Edmonton. Meanwhile, prices soared all summer long. On 25 occasions (five times more often than in the previous two years combined), they went above $900 per megawatt.

Consumers might be feeling hot under the collar about how some electricity generators curtailed production while demand was high, artificially driving up the pricing. Until rules are changed or a ‘capacity market’ is created, however, such actions and pricing by generators are legal in the province.

In Ontario, electricity use rose by nine per cent in July, but the impact on hourly prices was more modest. Large users of electricity who are involved in the Industrial Conservation Initiative (ICI) cut their consumption at key times, which proved sufficient to dampen overall peak demand.

What’s more, by curtailing consumption this year, they moderated what they will pay next year. This ‘peak-shaving’ activity will help Ontario avoid or postpone the building of new and expensive generation capacity in the future.

For Class B customers not involved in ICI, July’s higher costs were offset by slightly lower Global Adjustment charges in August. 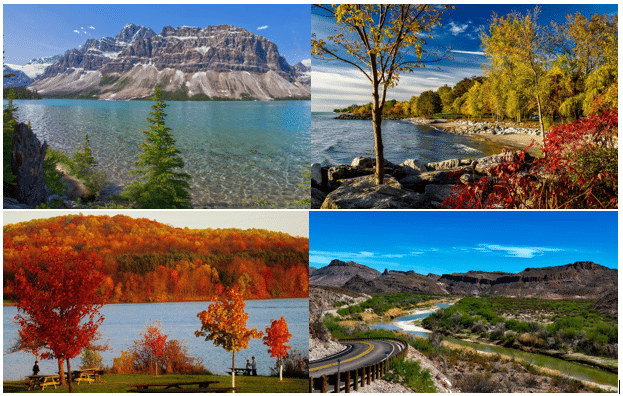 Images of summer in (clockwise from top left) Alberta, Ontario, Texas and Pennsylvania

According to the Electric Reliability Council of Texas (ERCOT), extreme heat pushed consumption to its highest levels ever, eliminating the cushion between demand and available generation. Prices regularly spiked above $1,000 per megawatt and even hit a daily high of more than $2,000.

These high prices meant utility bills for Texans increased immediately. The heat will also affect transmission costs for customers in the Four Coincident Peak (4CP) program by setting a higher demand charge for their bills in the coming year.

A heat wave pushed up demand for electricity in the American northeast, including the Pennsylvania, New Jersey and Maryland (PJM) power pool, but in contrast to last year, average monthly prices only rose by less than one per cent.

The PJM capacity market both (a) encouraged users to curtail consumption and (b) ensured more than enough generation capacity was available to keep short-term price shocks in check. That said, the ample capacity will be recovered from PJM industrial customers through higher rates in the year ahead.

In summary, the hot summer has had a price tag. In jurisdictions that rely on hourly signals, such as Alberta and Texas, the price increases were high and immediate. In areas with both hourly pricing and capacity markets that allow proactive customer participation, such as Ontario and PJM, customers will instead feel the impact down the road.
Beating the summer heat means using more air conditioning to cool offices and plants. It means higher energy costs, as well. One of the risks of climate change is the more frequent occurrence of extreme heat days.

For energy managers, in terms of risk mitigation, it is always a good strategy to understand your local energy market and implement a plan that considers efficiency, capacity and demand response. Through such a plan, you can reduce your cost exposure when high heat puts stress on the electricity grid.

Indeed, the strategic management of energy is only going to grow in importance in the future, no matter the market in which a company operates.